Henry Corbin on Tolkien's Lord of the Rings 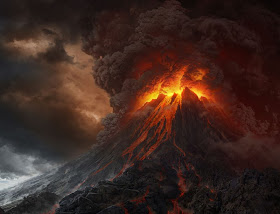 What follows is from the Epilogue to « L'Elément dramatique commun aux cosmogonies gnostiques des religions du Livre », Cahiers de l'Université Saint Jean de Jérusalem 5, 1979, 141-174. It appears in English as "The Dramatic Element Common to Gnostic Cosmogonies of the Religions of the Book," Studies in Comparative Religion 14/3-4 (1980): 199-221. This is the last talk Corbin delivered. He presented this essay in June, four months before his death in October, 1978.

"…Is it right to speak, as is often the case, of the pessimism of Gnosis? Such a judgment assumes that one has forgotten what the struggle of the Gnostic is about, what its origin is and what its outcome will be. This outcome makes it clear that if gnosis despairs of this world it is in the form of a desperatio fiducialis, a confident desperation… Where then is the optimism of this despair rooted?

For this optimism is in contrast with the grandiose but hopeless perspective of the heroic Nordic epic, with its eschatological vision of Ragnorak, the Fate of the Gods. There too the gods are the allies of men, and both together are partners in the same struggle against monstrous cosmic powers; but they know that they will finally be killed by these monstrous powers, and that after that the world will be destroyed. “The victors are Chaos and Insanity, but the Gods who will be defeated consider that the defeat is not a refutation… They offer absolute resistance, perfect, because without hope…” [W.P. Ker, The Dark Ages, 1904] Certainly the predominance of Darkness is not a refutation of the Light. But inversely, when the Light prevails over Darkness, is this a refutation of Darkness? Does Darkness allow itself to be refuted? Will the Light simply be its refutation?

I would like to reply to these questions with the aid of a recent work, Tolkien’s Lord of the Rings. I think that this is the first time since the conclusion of the Grail cycle that there has appeared in the West an epic at once heroic, mystic and Gnostic, the narrative events of which can enchant the wise both young and old because they will recognize its hidden meaning. Throughout the epic is dominated by the theme of the maleficent Ring mislaid in the country of Light. This ring continually incites the best among the beings of the Light to submit to the temptation it represents: the will to power. Indeed the temptation is great to use the evil will to power in the service of the Light. Moreover it is not in the Darkness that the temptation of the Darkness can become virulent, but in the realm of light. It is in the world of Light that the drama, which for all gnoses initiates cosmogony, has its origin.

But the world of Light absolutely must not resort to the evil will to power in order to ensure its victory over Darkness. To resort to that desire would be to ensure the triumph of the Darkness. It is not even enough to hide, to bury the Ring in some secret and unknown place in the realm of Light: its malefic influence will continue to operate. It must be not simply rejected but destroyed. But to destroy is a negative action, and the world of Light does not permit negativity.

The weapon of the light is of another order: it is to compel the Darkness to destroy itself, to accomplish its negation by the negation of its own negativity. To destroy the evil Ring, representative of the will to power, is to cast it back into Darkness, so that the Darkness destroys what has issued from it. A fearless hero, overcoming the most terrifying apparitions and traps, must carry the Ring back to its place of origin: to the furnace which is in the crater of the mountain of the Lord of the Shadow, in the land of Darkness. When the hero finally casts the Ring into the abyss, the world of Light is delivered from the evil will to power. This is the theme of Tolkien’s epic.

What the hero performs in this epic appears as a Quest in reverse of the Quest for the Holy Grail. But at the same time this Quest seems to be a necessary prelude, a Quest without which the Quest for the Grail cannot succeed. Parsifal’s speech, at the end of Book XV of Wolfram von Eschenbach’s epic, warns us that “no one can obtain the Grail except him whom God himself has appointed.” From this time. Wolfram tells us, “this word traveled across all lands, that no one could win the Grail by fighting for it, and so, many knights gave up searching for it.” For the Elect are not appointed by God to become ‘possessors’ of the Grail by force of arms. They must first of all renounce such possession, and this is to destroy their will to power through their own powerlessness. Only then can they attain the vision of elsewhere to which they must commit themselves. “This is why the Grail still remains hidden to all eyes,” Wolfram tells us.

We know what he means: it is hidden to all eyes of the flesh. The epic of the Grail ends in occultation. Parsifal carries it back to a mystical East…that is not on our maps, or it is taken from this world and withdrawn to the “spiritual Palace” (Galahad). Must we then speak of the pessimism of the Grail cycle? To do so would be to forget…what is the nature of the struggle that opens to way towards the Grail, and what the eyes are that perceive this way. The world in which the Grail is occulted is still visible to the eyes of fire, and that is why there will always be secret Knights-Templar who pursue the Quest for the Grail… [F]or it is not with the weapons of the will to power but through knightly service that one is a partner of a God in exile and that one sets free the sparks of light imprisoned in… the world of shadows and defilement…"